The Bandit of Cranberry Lake

Next to cats (my favorites), raccoons are probably the most enjoyable little critters I can think of. They have such inquisitive faces, and don’t mind getting up close and personal with humans in certain environments. Unfortunately, there aren’t any raccoons…or at least I’ve never seen any in my neighborhood in Scottsdale. However, when I lived on the Monterey Peninsula there were many frequent little visitors on the skylight above my bed. Fun fact: a group of raccoons is called a “gaze.”

A friend (Linda Grasse Murray) who lives in the woods of New York, recently sent me a photograph of one of the many raccoons she’s worked to rehabilitate over the years. Linda was particularly fond of “Bandit” who came to her after being nursed as an abandoned baby by a neighbor’s cat. Her property is remote and not frequented too much by humans—an ideal place for a human foster mom to introduce Bandit to a new life of living on his own. Linda and Bandit would take daily walks deep into the nearby woods and Bandit gradually began to go off alone, but would always return to Linda’s house later in the day.

Finally, it was time for Bandit to become what nature intended—a wild raccoon. Linda took him and another adopted raccoon named Kena, whom Bandit had bonded with, to a heavily forested area called Cranberry Lake. The new location afforded them plenty of food, water and shelter. Bandit and Kena were released and wiggled their way into the undergrowth, home at last.

Linda has been rehabilitating various wildlife animals for over 20 years, and estimates she’s helped over 100 raccoons over those years resume a normal, healthy life in the wild. Below is my salute to Bandit along with my thanks to Linda for introducing me to him. Click on the first picture to start a little slideshow that shows the progression of my painting from sketch to final product. 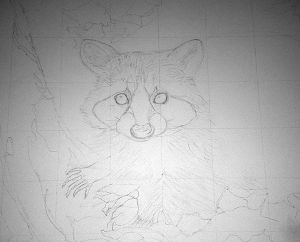 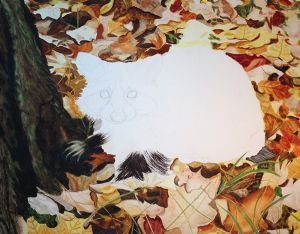 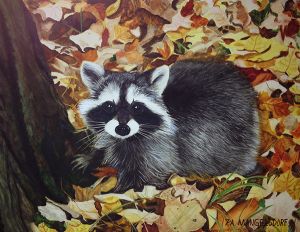