About a month ago, I wrote about Wickenburg, Arizona’s Gold Rush Days and some of the festivities associated with that event—including the Wickenburg Art Club’s art show. My friend, Terrie Grasse, and I hosted our own art tent featuring some of our work during the three day event. I also entered two of my paintings in a separate art exhibit that featured artists from several states showcasing artwork from many different media. 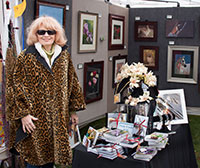 The show concluded this past weekend, and by all accounts, it was a success for the community and for the exhibitors. Although the weather for the event was mostly sunny, Saturday produced some very cold and overcast weather, a few hours of rain and even some brief snow flurries.

As you can see in the photographs, Terrie and I were bundled up during the show, but made many warm friends who dropped by our tent. 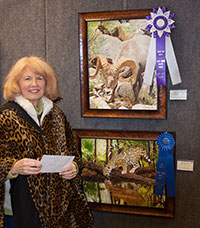 For me, the separate art exhibit proved to be the most wonderful surprise! The two paintings I entered were both judged worthy of ribbons—“Jaguar Reflection II” received First Place in the Watercolor category and “San Juan River Big Horn” was awarded Best of Show. The “Best of Show” ribbon also included a generous monetary award as well.

For any of you who may have displayed your art in outdoor tents, you know how much work and preparation are required to set up and display your work. Despite the work, long hours and chilly weather, I wouldn’t have traded those three days for anything else. I made many wonderful friends, sold some of my work, and was fortunate to have earned some awards recognizing my artwork as well.

Now that it’s over, however, I think I’ll turn up the heat and have a nice hot cup of coffee.

This entry was posted in Events.