Jaguar in the Desert

I’ve just completed this watercolor painting I’ve entitled “Jaguar in the Desert.” As a reference for the painting, I used a friend’s photograph of a leopard she took while on safari in Africa. 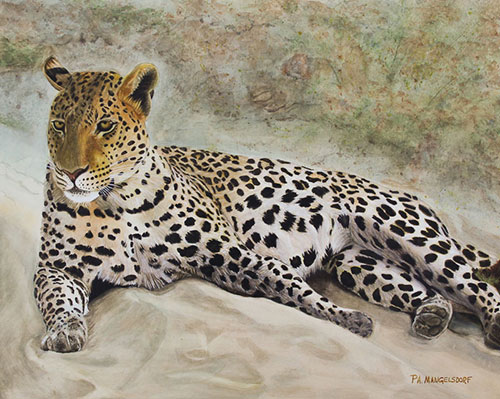 Jaguar in the Desert

However, this particular cat reminds me of a jaguar (a somewhat larger cat than a leopard and native to Central and South America as well as a few locations in the southwestern U.S., Mexico). One Arizona jaguar that was recently snared along the Arizona-Mexico border by the Arizona Game and Fish Department was “Macho B”. At the time of his capture, he was the only known Jaguar left in Arizona. He was trapped, fitted with a tracking collar and later released. Within days of his release, the tracking collar data showed a deterioration in his activity and he was recaptured. After further evaluation, “Macho B” was euthanized due to kidney failure. A tragic end to the life of a beautiful, and probably unique, cat within Arizona.

My painting is in memory of “Macho B”—may he always be remembered as the beautiful, wild jaguar that he was. Jaguars are one of the most agile hunters of the so-called “big cats” (lions, tigers, jaguars and leopards). When left undisturbed in the wild, they can live to be 20 years old (“Macho B” was at least 13 years old based on earlier sightings over the years).

Unfortunately, man’s encroachment on their habitat continues to threaten their numbers. Man is the jaguar’s main predator who illegally kills them for their beautiful coats, or as a misguided means of trying to protect an occasional cow from falling prey.

I greatly admire the big cats (jaguars and leopards in particular) for their beauty and majestic bearing. So, you may soon see some more of them in my Galleries.